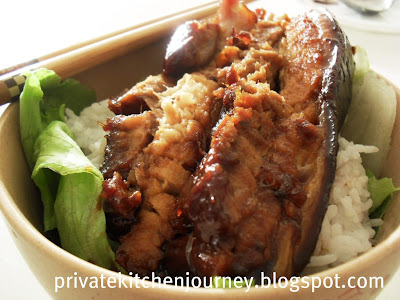 I am not sure the real reason but in 2010 I think I have done more food experiments than I have ever before. I have also bought so many recipe books in 2010 that I have lost track of how many I have bought.  Could be influences from watching Masterchef Australia or could just be not needing to work much on weekends anymore, hence more time to indulge in my passion in my favourite spot at home (my kitchen of course!).  As I have bought so many recipe books last year and also receive a couple as X mas presents, I am sometimes in a dilemma as to what to experiment as there is just too many choices but not enough time. I guess the wisest choice is always to look at my fridge or kitchen pantry to see what I have got and see if there is something special I can try out from the recipe books.
I had a nice piece of pork belly that I bought which has been sitting in my freezer for a couple of weeks.  I initially bought that to make roast pork but decided to try making "dong po" pork instead when I came across the recipe in "Poh's Kitchen" recipe book.  The outcome was quite good although I could have braised it longer so that the skin is more tender.  I modified the recipe slightly as when I was about to start, I realize that I forgot to get some of the ingredients hence substituted a couple of items with what I have got at home - again trying to achieve my goal of being resourceful..lol.

For those unfamiliar with "dong po"pork, it is actually braise pork belly but instead of cutting them up in pieces to be braised, it is braised as a chunk and then sliced up after the process has been completed.  Anyways, recipe as per below...enjoy:)

Method:
1) To prepare the pork belly, score the skin with 5mm parallel slits, then repeat in a perpendicular direction to create a lattice effect.
2) Heat the oil in a wok over medium heat.  First place the pork with skin side down, to render some of the fat and crisp it up (this takes about 5 minutes) before browning all sides. (note: be careful as there can be some splattering of oil due to moisture coming out from the meat).  Set aside when all sides have been sealed (takes about 4-5 minutes each side) and have developed some good colour.
3) Combine spring onion (or coriander if using as substitute), ginger (or chinese five spice), sugar, both soy sauces, wine and water in a wok (or heavy based non-stick saucepan) over medium heat until the sugar dissolves.  Lower the pork into the wok and simmer for 2-2 1/2 hours (turning the meat a few times during the cooking process), or until the meat is very tender.  If necessary, add 1-2 tbs of water to prevent the sauce from burning and sticking to the bottom.  The sauce should be a sticky glaze.
4) Rest for 15 minutes.  Cut the pork into long thin slices, like bacon, and serve as a sharing dish with rice and some steamed Asian greens.