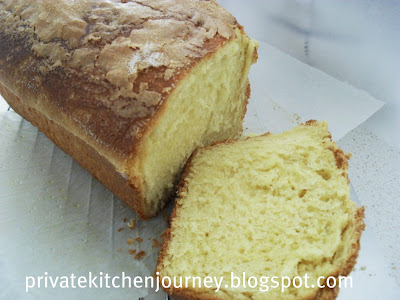 A couple of years back, I really thought that one need a bread machine to make bread at home, but after trying to make it without one, I find that it is actually quite an effortless process especially when using a basic mixer with a dough hook.  Only thing is one needs to be really patient as there is lots of waiting time in between when the dough is being proof.  Since making bread for the first time last year, I have been making it at home quite often and really do enjoy the process.  I have been meaning to try making Brioche, which is a french bread for quite a while after bumping into this recipe in June 2010 issue of Australian Gourmet Traveller.  Finally I have a chance to try making it and OMG, it is the simplest bread to make as compared to my other bread making experiences.  It was a fairly quick process and the outcome was really good.  The bread has this really light feel and tasted so soft and moist even after a couple of days!  Anyways, recipe as per below, do give it a try.

1) Warm milk in a small saucepan over low heat until lukewarm,  Combine yeast and half the milk in a bowl, stirring to dissolve.  Stand in a warm place until foamy (8-10 minutes)
2) Whisk remaining milk with egg yolks in a bowl and set aside
3) Mix flour, sugar and a pinch of salt in the bowl of an electric mixer, fitted with dough hook, until combined.  Make a well in the centre, add yeast mixture and yolk mixture.  Beat on medium speed until a smooth dough forms (4-5 minutes)
4) While mixing, gradually add one-third of butter at a time, beat until dough is elastic and pulls away from sides of bowl (8-10 minutes).
5) Transfer to a lightly buttered bowl, cover and stand until doubled in size (1 1/2-2 hours).
6) Knock back dough, knead on a lightly floured surface until smooth, shape into a loaf and place in a 11cm x 24cm loaf tin buttered and lined with baking paper.  Cover, stand until doubled in size (30 minutes-1 hour).  Meanwhile, preheat oven to 180C.)
7) Brush top with eggwash, dust with sugar, bake until golden and risen (25-30 minutes).
8) Remove from tin, place on a baking tray lined with baking paper, return to oven until sides are golden (8-10 minutes), cool on a wire rack.

Posted by Private Kitchen Journey at 10:49 AM