Desserts Collection: Raspberry Souffle my way on a rainy day! 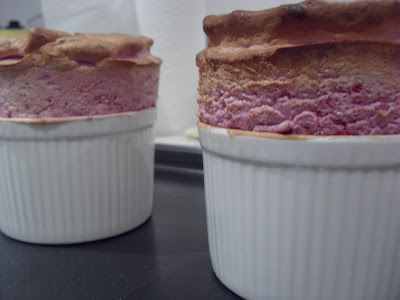 Desserts though common from where I came from, it is never the way it is here in Australia.  Since I moved here, a dinner meal is never complete without desserts to finish it off:)  Before I moved here, heard about souffle but never tried them or didn't know what it taste like but this dessert seem popular in Hong Kong television dramas especially when dining at sophisticated restaurants.  Months back I did a savoury cheddar cheese souffle but did not seem to like the taste...I guess its an acquired taste.  Decide to try making a sweet souffle and see if I like it.  Not too long ago one of the masterclass series on Masterchef Australia did a Rhubarb and Blackberry Souffle and I decided to look up the recipe but modify it with the ingredients I already have at home hence Souffle "my way" (chuckle!)....anyone interested, here are the steps...

1)  Firstly butter the base and sides of about 4 medium size ramkins (butter should be soft and not melted).  Refrigerate for 5 minutes and repeat the process.  Sprinkle caster sugar on the base and the sides.  Refrigerate until ready to use (This process apparently helps the souffle rise).

2) Preheat oven to 180 degrees C.  Place 150 g frozen raspberries, 75 g caster sugar and 1/4 cup water in a saucepan, bring to boil and then on medium heat, simmer for around 5-10 minutes.  Mix 1 tablespoon cornflour with around 3 tablespoon water and add to raspberry mixture and stir.  Once mixture thickens, remove from heat and cool to room temperature.

4)  Place the whipped egg whites in a separate bowl and add the raspberry mixture and slowly fold the mixture till incorporates.

5) Place mixture in the buttered ramkins until the top and smooth top with a knife.  Run fingers through the side.  This is now ready to go into the oven for approximately 12 minutes or until set. 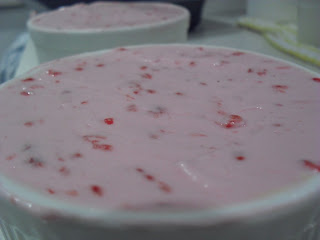 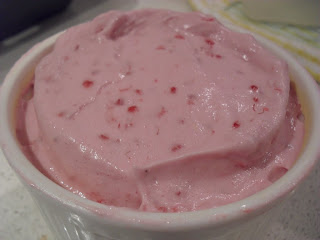 Viola!  The souffle did rise to an amazing height...warm sweet souffle on a winter rainy day...can't ask for more can I ? 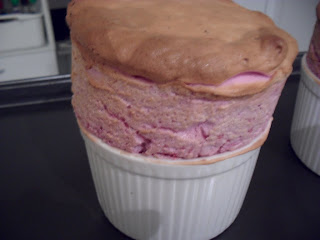