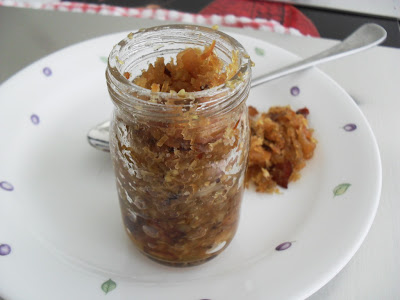 A couple of months back, bought a copy of Momofuku recipe book by the famous Korean American chef David Chang and co written by peter meehan.  Lots of the recipes are pretty interesting and not over complicating.  One that I have longed to try for a very long time is the XO Sauce.  However, living in Wagga Wagga, a couple of the ingredients was not easily available (they do sell XO sauce in a bottle but that does not help really lol) especially dried scallops and dried shrimp.  Hence, on my recent trip home and to Sydney, I made sure I got those 2 ingredients.

For those unfamiliar with XO sauce, its a very concentrated sauce pack with lots of flavouful ingredients such as dried shrimp, dried scallops, ginger, garlic and some commercial brands out there do also sell Salmon XO sauce which I have not tried.  It is very versatile on anything, a tablespoon on stir frys, fried rice, seafood etc makes a world of difference.  It can be stored in a container and kept in the fridge for over a month.

Anyways, recipe as per below, do give it a try:)

(Adapted from MOMOFUKU recipe book by David Chang and Peter Meehan - modified slightly)
Ingredients:
1/2 cup dried scallops (Can be bought at asian dried seafood stored.  It is rather pricey hence use them sparingly)
1/2 dried shrimp (Can be bought at asian grocery stores)
1/2 cup peeled garlic
1/2 cup peeled ginger, sliced
1 cup chopped country ham or chinese sausages (you can substititute with other ham type which I did if you can't find country ham)
1/2 cup grapeseed oil or other neutral oil
1 tablespoon crushed dried red chille


Method:
1) Place scallops and shrimp in a bowl, rinse them and soak them in water overnight covered.
2) Place garlic and ginger in a food processor, pulse on and off until finely chopped, place in a bowl.
3) Discard water from the soaked dried shrimp and scallops and place in food processor, again pulse on a off until it is finely chopped, placed in bowl.
4) Placed ham in food processor and mince till fine, placed in a separate bowl.
5) Heat oil on medium high heat in wok for 1 minute
6) Add ham into oil and fry till browned and crisp (around 5-10 mins)
7) Add dried chille and fry for another 2-3 minutes.
8) Turn heat down to very low and add rest of the ingredients.  Let it simmer for about 45-55 minutes.  Stir it a couple of times in between to ensure that ingredients does not stick on the base.  It is ready when the garlic and ginger is dirty blonde in colour.  Can be used immediately once ready or stored in a container and refrigerated for a month or more.
(p.s.  After finishing this, the wok will have flavourful remains of the XO sauce.  It would be such a waste to just wash them off, hence look out for next blog write up on Wok "remains"of XO sauce stewed chicken!) 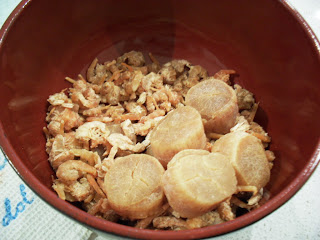 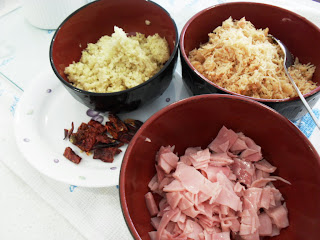 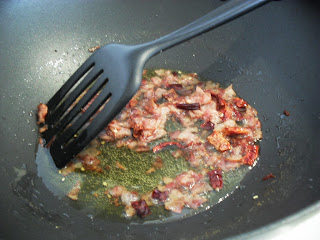 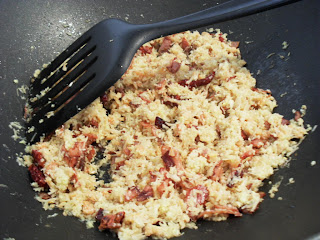 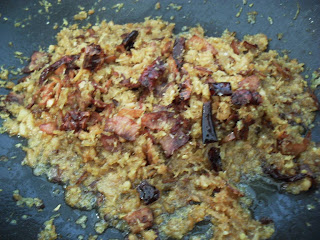 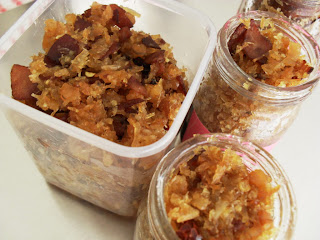